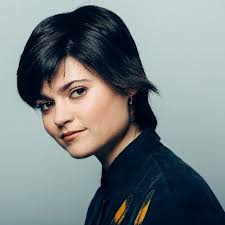 Hattie Briggs is another young British artist who must surely be destined for the big time. In January 2014, the 23 year old from Gloucestershire quit Oxford University in the second year of her Russian degree to concentrate on her musical career. The move looks to be paying off. Inspired by the likes of Eva Cassidy, Joni Mitchell and James Taylor.

Hattie possesses a beautifully pure voice that is full of emotion. Her music has been played on TV, On BBC Radio 1 & 2 and 6 Music. She released her debut album ‘Red & Gold’ in April 2015. It includes a cover of Eva Cassidy’s version of Sting’s ‘Fields of Gold’ and was produced by Eva’s brother Dan, who also plays on the record.In July 2016 she released her second album ‘Young Runaway’ and the launch was in front of an audience of 350 in her home town of Stroud, where she started busking at the Weekly Farmers Market.

Hattie’s songs have a depth, breadth, intelligence and quality that completely belie her tender years. Her guitar and keyboard skills are accomplished, accurate and controlled, but the stand out is her voice which has the clarity and resonance of the finest crystal and a delivery that can strip emotion like peeling a ripe fruit. The new album is a lovely, upbeat piece of work.

Hattie has had a very busy two years of touring, completing her first national tour supporting Seth Lakeman and Kathryn Roberts in the spring of 2015. That was followed by her own 21 date tour and a 19 date European tour. 2106 has been just as busy with a string of show case UK dates, a further tour of Europe and a tour of USA and Canada. Her Town Hall Live date will be one of only a few UK dates in 2017, as she will again focus on Europe.
Hattie will bring her band with her who play cello, electric guitar, banjo, pedal steel and percussion. Hattie, herself, plays piano, guitar and ukulele.

Support on the night will be local singer song writer Lucy Marshall from Worlaby.