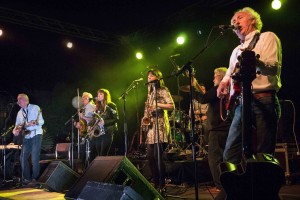 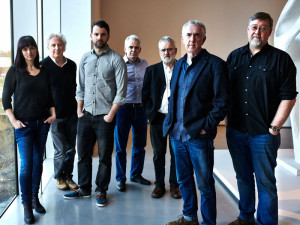 The Mighty Doonans are back!! Voted Town Hall Live’s concert/ artist of the year for 2015, we have received many requests to rebook them for 2016. The band have a deserved reputation for their imaginative and innovative interpretation of traditional and contemporary songs. With brass, drums, keyboards, electric guitars and amazing vocals they have the ability to blend different genres of music and dance, and more than the occasional joke, into their performance.

It leads to a thoroughly entertaining evening that delights audiences across the folk world. The original ‘Doonan Family Band’ have been part of the British music scene for over 40 years. Original band members Mick Doonan, Kevin Doonan, Phil Murray and Steve Luckley are joined in the Mighty Doonans by Mick’s daughters Rosie and Francis, by Stu’s son Jamie and great friend Ian (Walter) Fairburn and occasionally by Phil’s son Ben, who has recently played in the London Musical ‘War Horse’.

Besides the excellent musicianship from all band members, one abiding feature of a Mighty Doonans concert is Francis’s dramatic Irish Dancing which has the audience shouting for more. The collective deliver their traditions and influences, with powerhouse arrangements and sensitive interpretations of a wide variety of material, whilst retaining their renowned rapport and relationship with their audience.

Advance Tickets for the concert are priced at £14 and can be obtained from the One Stop store in the town, from Brian on 01652 649230 or from www.wegottickets.com. They will be £16 on the door. 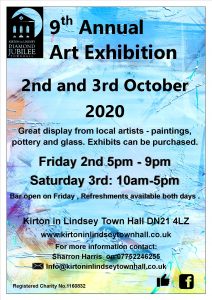 This week's 'Waste not Want Not Bag' contents, shown below.

Bags will hopefully contain fresh produce too but we won't know what until Friday Morning .

Open to all £5 per bag, we can now take card payments.

Friday morning 11-12 noon at the front of the Town Hall . We can deliver locally to anyone isolating.

Please return any bags if possible as we are running low.

Our Art Exhibition is going ahead , there will be a few changes to make it safe for our Artists, staff, volunteers and visitors.

We will have over 100 pieces of art by local artists on display and hope to see you there.