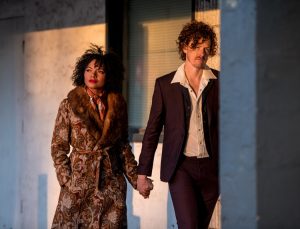 Since their last appearance at Town Hall Live in May 2018, Birds of Chicago have taken the UK Festival stages by storm with appearances at The Isle of Skye Festival, The Cambridge Folk Festival and Celtic Connections.

In so many ways we are a word weary culture, ever searching for ways to communicate in fewer and fewer words and syllables.  Our on line, blogged out, you tubed attention spans are truncated and fragmented like never before.  Birds of Chicago, the collective centred around Jeremy Lindsay (aka JT Nero) and Allison Russell, reassert the simple notion that beautiful words and music can still tap deep veins of emotion.  They seduce us with their joyous, intimate, spare, rousing and haunting evocative lyrics.  Their latest album ‘Love in Wartime’ contains one memorable song after another, with each tune its’ own musical suite filled with spiralling melodic beauty.

With ‘Love in Wartime’ they have created a real buzz and have broken through to a much wider audience in America, the UK and Europe.

Russell and Nero played with different bands pre 2012, Allison with Po’Girl and Nero with JT & The Clouds.  In fact both played in the early days of Town Hall Live.  In 2012 JT, who writes the bulk of the songs, found himself a transcendental vocal muse in Russell (a powerful writer herself) and the band honed its’ chops on the road playing 200 shows a year between 2013 and 2017.  They first played Kirton in 2013 and it was five years before they returned, giving their usual sublime performance.

Together there is an unmistakable chemistry, with Jeremy finding the perfect voice for his rock and roll psalms.  Both sing, Jeremy plays guitar whilst Allison plays banjo, percussion and sublime clarinet.

Support will come from THL favourite DANNY BRADLEY, who we feel is the perfect match to the Birds.  Besides being an excellent guitarist, Danny has a unique and distinctive voice.  He holds audiences in the palm of his hand, with stunning versions of familiar songs, as well have songs of his own.  Why he hasn’t been ‘discovered’ perplexes us.

Advance Tickets for this concert are priced at £14.00 and can be obtained from the Costcutter (Kirton), from Brian on 01652 649230 0r from www.wegottickets.com