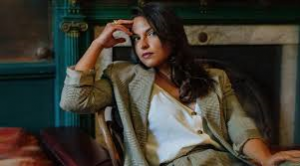 ‘Danni Nicholls is an artist with the elegance, the voice and the imagination to restore your faith in the visceral power of an original song’

Danni Nicholls interest in music began at a young age thanks to her grandmother’s collection of American Folk, Country and rock ‘n’ roll music.  She got her first guitar at the age of sixteen and her connection with it was instantaneous.  As soon as she the chords she started writing her own songs.  It helped that she had a lovely rich and expressive voice that is instantly recognisable.

Eventually she released two EP’s, and in 2011 she met legendary producer Chris Donahue at an Emmylou Harris concert on London.  The meeting lead to an invite to Nashville to record her debut album ‘A Little Redemption’ with Chris.  A second, ‘Mockingbird Lane’ followed in 2015.

All the time she was building a reputation across the country for her live shows.  She played headline tours and support slots for such artists as Lucinda Williams and Shakin’ Stevens and made numerous Festival appearances in the UK and Europe.

In 2017, she released a live album in association with Vintage TV and received consecutive nominations at the Americana Awards for ‘Album of the Year’ and ‘Artist of the Year’.

In 2018 she again went over to Nashville to record her third album ‘The Melted Morning’ which was produced this time by Jordan Brooke Hamlin.  It is a lovely, elegant album packed with great songs.

Danni has continued to go back to Nashville, where her star has ‘risen’.  It is likely she will divide her time between the UK and the States in future, as she received her American work permit Visa in 2019.

Danni last played Town Hall Live in December 2018.  It was her first concert she ever played with Tom Dibb (lead guitar) and Mark Lewis (bass).  It was clear from her performance that she enjoyed every minute of it.  The trio then went on to play a full nationwide tour to great acclaim and now all three are back to play THL again.

The word that recurs most often in reviews of Danni’s songs and performances is ‘elegance’.  Danni is too modest to agree, but it is a style that she has lovingly honed and has been brought to the fore when accompanied by Tom and Mark.

Above all it is her rich, velvety voice and the emotion within it that makes her one of the country’s best singer songwriters of smoky soul, folk-pop and heart-warming alternative country.

Support will come from Town Hall Live favourite Rhiannon Scutt, who now lives in Sheffield.  Rhiannon, as we know is a great songwriter and singer.  She is a phenomenal guitarist, delivered in her own unique style.  She has been working on a new album, which will be released in the summer.

Advance Tickets for this concert are priced at £14 and can be obtained from Costcutter (Kirton), from Brian on 01652 649230 or from www.wegottickets.com.

A brilliant night of music, singing and repartee from Hilary James & Simon Mayor. A class act. If you are wondering what the big instrument is - it's a mandobass. So lovely just to have live music back. ... See MoreSee Less

Something for half term? Bring the family for a Roman themed crafting morning on October 26th between 10am and 12 noon. Lots of opportunity to paint, stick, cut-out and mould with clay and you don't have to clear up the mess! ... See MoreSee Less