Danny Bradley and A Different Thread 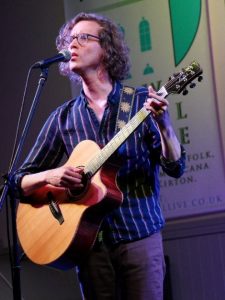 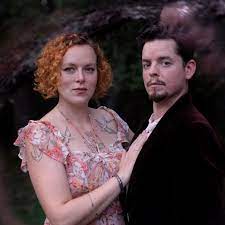 Over the last eight years Danny Bradley has appeared at Town Hall Live on numerous occasions, initially with his band The Crash Blossoms but mostly as a solo artist.  On each occasion it was a support to various headliners, such as Birds of Chicago. Lynne Hanson and Good Lovelies.  He is one of only two support acts that have been called back for an encore.  Not only that, it has been every time he has played!  It is unheard of.

The last occasion was particularly special.  In October 2021 he was supporting Ross Wilson of Blue Rose Code when due to illness, Ross could only get through three songs.  Danny had played his usual strong set and then stepped into the breach to recover the situation.  He played a further one hour set and received requests to play a second encore.

Someone in the audience commented ‘he is good enough to headline’, so here we are.

Danny was born in America and grew up in Hull before moving to Liverpool five years ago.  Last year he released his debut album ‘Small Talk Songs’ and won the Liverpool Acoustic Music Award.  His playing is a delight and he his adventurous with his lyrics.  He also plays killer cover songs, which are totally unlike the originals.  One could listen to his version of ‘I Don’t Like Mondays’ over and over again.

‘Small Talk Songs’ is an excellent album that hold the attention throughout, and shows a depth of musicianship promising much more for the future.

Joining Danny as special guests are A Different Thread who will play a 60 minute opening set.  A Different Thread are a collaboration between Robert Jackson from Lichfield and Alicia Best from Durham, North Carolina.  Both are songwriters in their own right and first met in 2016 when busking in Galway and have been on the road ever since.  They officially formed when winning the open mic competition at Shrewsbury Folk Festival in 2017 and went on the play sessions on the BBC and NPR radio.

Pulling from their respective roots, Robert and Alicia have developed a sound that embraces the many elements of English and American folk music.  Their blend of intimate vocals and atmospheric instrumentation is reminiscent of Gillian Welsh and Dave Rawlings, whilst offering hooks in the style of folk rockers like the Cranberries and The Band.  In late 2021 they recorded their sophomore album, with a full band including fiddle, flute and four piece harmonies.

Tickets for this concert are priced at £12.50 and can be purchased from Londis (Kirton), from Brian on 01652 649230 or brianchudley@btinternet.com or www.wegottickets.com