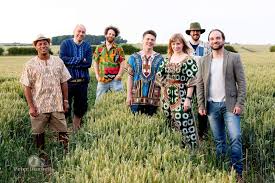 Gary Stewart and his band masterfully recreate not just the sound of the Graceland album, but also the energy and soul that makes the original album such a joy to listen to.  It’s an ambitious and wonderful feat to achieve in a live performance.

Expect to hear those magical songs with their captivating stories, distinctive vocals and harmonies and South African rhythms brought to life in front of you, from layers of guitars and percussion right down to the legendary bass solos and even some token dance moves.

The band regularly sell out venues across the country and have a large following.  The have starred at many Festivals over the last few years.  Don’t miss them, it is a great show and a great night out.

Gary will start the evening with a solo set that highlights wonderful songs from his three solo albums.  Then it’s ‘Graceland’ the album and it’s authentic sound.  Let the singing, dancing and nostalgia take hold and pretend you are basking under the hot summer sun in South Africa.

Tickets for the concert are priced at £16 and can be purchased from Brian on 01652 649230 or brianchudley@btinternet.com, from the Londis store in Kirton Market Place or from www.wegottickets.com.