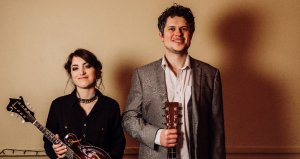 ‘Capable of making you dance, cry and think, Gilmore & Roberts give a masterclass in performance, repartee, song writing and how to present the songs’

A Town Hall Live return for the ever popular contemporary folk and acoustic duo Gilmore & Roberts, who combine award winning song writing with astounding musicianship and their trademark harmonies to create a powerful and eclectic sound.  It seems incredible to think that it is exactly 3 years since they last played the venue.

The duo have been nominated three times at the BBC Radio 2 Folk awards and are Katriona Gilmore (fiddle  mandolin and vocals) and Jamie Roberts (guitar and vocals) who in 2006 met whilst studying at Leeds College of Music.  Since then they have released a five studio albums and one live album in 2016 which celebrated their ten years together.

The latest ‘A Problem of Our Kind’ was released in October 2018.  It was hailed as a masterclass in song writing, By Folk Radio UK and awarded 5 stars in RnR Magazine.  It received glowing reviews across the board and national airplay on BBC Radio 2 and BBC 6 Music.  Recorded at the duo’s home in Sheffield by co-producer Ben Savage, it contains some of the most stripped-back arrangements of their career so far but also contains some of Gilmore & Roberts powerful songs.  As usual, the songs deal with different aspects of being human, some negative like selfishness or materialism and some positive, like our sentimental side and they always tell a story.  One song from the album ‘Bone Cupboard’ won the Fatea Magazine ‘Song of the Year Award.

Gilmore & Roberts are two of the hardest working musicians in the UK.  In April and May this year they embarked on a 21date date UK Tour to promote ‘A Problem of Our Kind’ and October sees them start the second leg of the tour.  We know from the Katriona and Jamie’s previous performances how good their concerts are.  Don’t miss them.

Support will come from Leeds trio, of Mark Rogers, Rachel Sutcliffe and Steve Foster, The Heathen Kings.  You may remember that they played Town Hall Live in September last year when they supported Greg Russell and Ciaran Algar.  They are the perfect fit for the headliners.

Advance Tickets for the concert are priced at £13.50 and can be obtained from the Costcutter (Kirton), from Brian on 01652 649230 or www.wegottickets.com/ 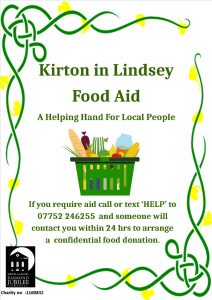 This week's 'Waste not Want Not Bag' contents shown below. Bags will also contain fresh produce too but we won't know what until Friday Morning . Sometimes it's fruit and veg sometimes it's meat or frozen goods. We are getting quite busy now and regularly sell out of the advertised bag. We will still be doing some of our mystery boxes ,which are a mix of items just as good value just different contents . Open to all £5 per bagWe can take card payments. Friday morning 11-12 noon ( or until we run out) at the front of the Town Hall We can deliver locally to anyone isolating. To find out more about where our bags come from follow this link .facebook.com/events/s/waste-not-want-not-bag-collect/871546976587619/?ti=cl ... See MoreSee Less

**Congratulations to our January 200 Club winners.** It only costs £12 per number per year, so if you want to join us you can find details on the poster or download a '200 Club Welcome Pack' from our website using the following link: kirtoninlindseytownhall.co.uk/200-club/ ... See MoreSee Less