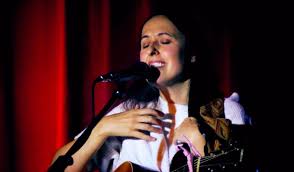 Logistical reasons mean that Hannah White will tour with her UK Band rather than The Nordic Connections.  The band will be made up of Hannah on acoustic guitar and vocals, Kieron Marshall on lead guitar and slide guitar, Tom Daley on bass and either Dan Wiebe or Emma Holbrook on drums.

Hannah’s music is influenced by country, blues, folk and soul and has a fresh sound coupled with a social conscience that remains distinctly her own with a voice that can switch from a sweet ballad to a heartfelt and reflective blues song to an upbeat rocky number.

Her 2020 album with The Nordic Connections won rave reviews and a UK Americana Award nomination.  Now she is back with a new album ‘About Time’ which again is an example of her emotionally piercing song craft.  It is a significant return in many ways, as it marks Hannah’s debut as a producer alongside her guitarist husband Kieron.  ‘About Time’ is an elegant collection of songs with heart and edge, all written by Hannah.

Prior to the collaboration with the Connections, the London born singer songwriter established herself as one of the UK’s fresh talents, via her solo albums Who’s Side are to On (2016) and Elephant’s Eye (2018).

Hannah’s music has been played on BBC Radio 2, BBC London and many regional stations, as well as internationally.  They all picked up on Hannah’s singular melodic voice and lyrical flair and signposted her stirring live shows that often included Kieron accompanying her.

She has wowed audiences whilst supporting the likes of Tim O’Brien, Thea Gilmore and Judie Tzuke.  She has performed at many major festivals and picked up press plaudits from R2, Maverick and Blues Matters magazines.

Music is Hannah and Kieron’s life, they live in Sutton, South London where they run the Award winning grass roots venue The Sound Lounge.

Join the band on her current tour, where her Town Hall Live appearance will be the only one in the North of England.

Tickets for this concert are priced at £14 and can be purchased from the Londis Store in Kirton, from Brian on 01652 649230 or brianchudley@btinternet.com or from www.wegottickets.com.