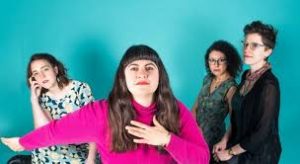 ‘Laura Cortese & The Dance Cards are pushing the envelope as a band creating a stunning forward looking sound, subtly, skilfully and beautifully’

Before forming The Dance Cards, Laura Cortese’s career included stints as an instrumentalist with Band of Horses, Pete Seeger and Rose Cousins.  She wears many hats, as a fiddler, singer, song writer, multi-instrumentalist and band leader, but above all she is an instigator of creativity.

After wending her way from California to Boston, she assembled The Dance Cards.  The band are Laura on vocals, fiddle, synth bass and glass harmonica, Valerie Thompson on cello, marimba and vocals, Jenn Moynihan on banjo and vocals and Natalie Bohrn on double bass and vocals.

Their original music is based on the lyrical rituals of folk, whilst exploring new territories of rhythm and sonics.  They draw their inspiration from diverse sources and musical traditions, melding them into a refined sound that’s broad minded but clear eyed.  The band is not a string band, not a string quartet, not a Capella or indie band, but somehow all of those at once.  Their music is adventurous and complex, delivered with power and heart.  It moves seamlessly from ethereal harmonies, to indie rock and to propulsive melodies.  Their lyrics deftly explore heartbreak, independence, and a search for a home in the world.   The vocals and strings are spacious and dreamy one minute and immediate and powerful the next.

It is no wonder that Froots Magazine described the bands’ album ‘California Calling’ as an absolute winner with skilled heartfelt writing gorgeous performances and a sense of vision.  It all those things that The Dance Cards bring to their live performances. In May this year the band will release their new album ‘Bitter Better’.

Support will come from PAUL HAWKSWORTH from Sheffield.  Reminiscent of Passenger and Jack Savoretti, Paul’s sound is steeped in acoustic folk and warm hearted songs.  He has a unique voice with a soft dusty tone; utterly dynamic.  Paul’s debut EP ‘Drifting Away’ was released in November 2019

Advance Tickets for this concert are priced at £14 and can be obtained from Costcutter (Kirton), from Brian on 01652 649230 or from www.wegottickets.com