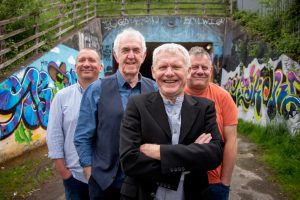 For our first concert of 2022 we welcome Wakefield band The Hunch to Kirton.  The Hunch are a four piece acoustic band who play a variety of Folk, Americana, Latin and Popular songs, with a generous dash of humour in between numbers.

The last statement will come as no surprise, when you realise they are fronted by Mick Doonan from The Mighty Doonans.  We know from his appearances with them that Mick stamps his own vocal style to well-known songs and makes them his own, as well as being a master of the pipes, flute and piccolo.

Mick is joined on lead vocals by Bob Thomas, another highly respected musician.  Bob fronted the folk rock band, Kitskye Will and as well as taking lead vocals on several songs plays Cajon, Bhodran and harmonica.

Mick and Bob are joined by respected musicians, Chris Hanks on acoustic guitars and Tony Bacon on keyboards, accordion and backing vocals.  Both are regulars on the West Yorkshire music circuit.

The Hunch are a collective with a ready wit and an easy rapport with audiences that any concert goes with a swing and a smile.  Their repertoire includes songs by artists as diverse and Dire Straits and Richard Thompson, Carlos Santana and Joan Osborne and Ray Charles and Vin Garbutt, all delivered in their own inimitable style.

Advance Tickets for this concert are priced at £12.50 and can be obtained from the Londis store in Kirton, from Brian on 01652 649230 or brianchudley@btinternet.com of from www.wegottickets.com