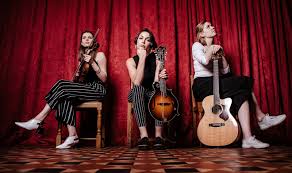 THE MAGPIES – ‘a natural chemistry, three voices that blend and harmonise beautifully’

Formed in 2017 when Polly Bolton and Bella Gaffney jammed backstage after a show in York, the pair quickly added Holly Brandon and Sarah Smout to the line-up.

Bella from Bradford, plays guitar, banjo and sings.  She writes folk inspired songs with her own original arrangements.  York based Polly first picked up the mandolin as a child and has been touring internationally in various line-ups since her teens and has appeared at Town Hall Live with the Dan Webster Band.  Holly, also from York, plays beautiful fiddle and has also played THL as part of the Josh Burnell Band.  Cellist Sarah is unfortunately unavailable for this concert.

As a band, The Magpies draw on their transatlantic influences to create a unique blend of Celtic, bluegrass and folk, transporting audiences to distant lands and capturing the imagination with their enthralling live shows.

The Magpies have performed at many festivals including Glastonbury, Cambridge, Wickham and Towersey to name just a view.  They also played at the International Folk Alliance, Montreal in 2019.  In the Spring of 2020 they were due to embark on their first ever full UK Tour to celebrate the release of their debut album.  Unfortunately it was cancelled due to the Coronavirus outbreak.

Support will come from Anglo-American duo A DIFFERENT THREAD, who are Robert Jackson and Alicia Best.  The duo are based in Robert’s hometown, Lichfield.  Alicia comes fro Durham, North Carolina.  They class themselves as British Americana, with Robert playing guitar and harmonica, whilst Alicia plays violin and drums.  They share the vocal duties.

Advance Tickets for this concert are priced at £13.50 and can be obtained from Londis (Kirton), from Brian on 01652 649230 or brianchudley@btinternet.com or from www.wegottickets.com