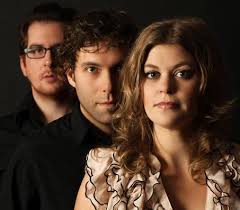 Newfoundland has a history of stunning songwriters, poets and players.  Over the course of the last decade The Once have written and knitted themselves into that history.

The Once are Geraldine Hollett on vocals and bohdran, Phil Churchill on guitar and violin and Andrew Dale on guitar, mandolin and keyboards.

Geraldine’s pristine and effortless vocals lilt and are harmoniously balanced by her bandmates Phil and Andrew.  Since hitting the road in 2009, the band have earned on of the most loyal followings in Canada.  Their reputation worldwide was enhanced in 2013 when they met and accompanied Passenger on his world tour.

In May 2018 they released their fifth full length studio album, ‘Time Enough’.  On it the band stay true to the root strength of their harmony driven sound, whilst extending the borders into fresh yet familiar territory.  They craft a sonically understated, but fulsome sound that accomplishes what The Once have also done well  stun listeners with perfect vocal harmonies.

The band have an uncanny knack of picking hit songs and putting their own stamp on them.  Their cover of Queen’s ‘You’re My Best Friend’ has received millions of plays on You Tube and is a firm favourite at their concerts.  They followed this up with ‘I Can’t Help Falling in Love with You’ on their 2015 album ‘Departures’.

The quality of their own songs like ‘We Are All Running’ and ‘By the Glow of the Kerosene Light’ that have an anthemic and ethereal feel to them.  Live they are sung in dazzling three part harmonies, often in acapella arrangements that stoke up a nostalgic longing for idyllic memories regardless of one’s own past.

The Once are one of Canada’s leading bands and we are extremely grateful to have them back to play Town Hall Live.  They last played in Kirton in February 2019 and gave their usual heart -warming performance.   The Once are special, don’t miss them.

We are all running

Come along on Sunday and buy some Christmas presents or treat yourself. ... See MoreSee Less

Good Morning all, just wanted to say Hello again as your new Venue Manager of the Town Hall and say a big thank to Sharron Harris for all her hard work over the last 6 years in this role, although she will still be seen around the hall with various groups such as the Craft Club and Community Shop.I also just wanted to let you know that the office opening hours are changing to the mornings of Monday and Tuesday 9-12 if you want to pop in and book any of the rooms.Hope to see you all soonJo Canton ... See MoreSee Less