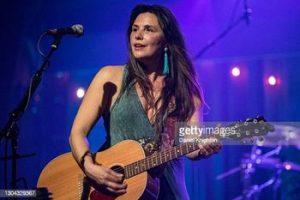 For the better part of two decades, Sara Petite has blazed her own trail carving out a mix of forward thinking country and Springsteen like rock & roll.  It is a sound that blurs the boundaries between genres, created by a charismatic front woman who has never been afraid to buck trends or speak her mind.

Since 2006 she has released six album, the latest of which ‘Rare Bird’, released in 2021, saw her widen her range.  The album’s track list is filled with heartland rockers, lushly layered Americana ballads and even a gospel; influenced tribute to civil rights leader John Lewis.  Whilst the music you hear in the collection sounds familiar, it also sounds distinctive and unique.

Raised in the rural town of Sumner Washington, Petite launched her song writing career after moving to San Diego California, where she still lives.  There she launched and developed her music which occupies its’ own sonic space.  Sara Petite doesn’t sound like anyone else, she just sounds like herself.  A rare bird indeed.

Live she is just dynamic and fills the stage with her personality and drive.  It will be such a pleasure to see her blasting out The Misfits and Crash Bang Boom, or performing poignant numbers such as Scars and Rare Bird at Town Hall Live.

Sara came over to the UK for the first time in eight years in 2021.  She was accompanied by Joe Coombs on lead guitar and Scott Warman on bass.  In 2022 the pair will be in the band again, and will also be joined by Michael Kastner on drums.  Along with Sara they are guaranteed to put on a dynamic concert.  It is one not to be missed.

Tickets are priced at £14 and can be obtained from Londis (Kirton), from Brian on 01652 649230/ brianchudley@btinternet.com or www.wegottickets.com/