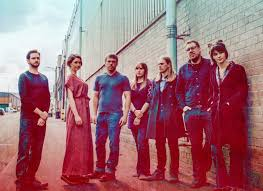 Dan Webster, from York, is well known to Town Hall Live audiences, having played the support slot on a number of occasions and has never failed to get a good response from the audience.

Dan is described as one of the UK’s best kept musical secrets.  He is a seasoned song writer, performer and producer.  His music is influenced by the sounds and storytelling traditions of both American and English music, which he uniquely blends into his own distinct fusion of folk and Americana.

Over the last 10 years he has released three full length albums, Diamond Land (2008), The Tin Man (2015) and Big Sky (2018), as well as several EP’s in between.  All mix folk, country and a little rock ‘n’ roll, delivered with Dan’s distinctive voice, great playing and an immaculate sound.

Over the same period Dan has shared the bill with such acts as The Levellers, The Paperboys, Seth Lakeman, Glen Tilbrook, Martin Carthy and Midge Ure, to name but a few.

According to American UK he is ‘the missing link’, the joining point where folk fuses with country, as good as any artist out of Austin or Nashville, he is Anglicana.

The latest album ‘Big Sky’ gained critical acclaim in the UK music press, getting 4 and 5 start reviews.  On the back of it Dan has promoted the album by forming a live band with the musicians who played on it.  He will be bringing them all to Town Hall Live.  They are Dan on acoustic guitar and vocals, the enigmatic Polly Bolton on mandolin and vocals, Emily Lawlor on violin and vocals, Rachel Brown on cello, Mark Waters on bass and Liam Hardy on drums.  Together they make a big sound with some virtuoso playing.

Advance Tickets for the concert are priced at £12.50 and can be obtained from the Costcutter (Kirton), from Brian on 01652 649230 or from www.wegottickets .com