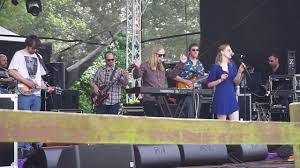 Joshua Burnell got a great reaction when supporting The Once earlier this year.  He was accompanied by his wife, Frances Sladen on vocals and Holly Brandon on violin.  They were so good that we had to have them back, this time as a full band.  The other members of the band are Nathan Greaves on guitar, Jack Woods on mandolin and acoustic guitar, Matthew Melford on bass and Ed Simpson on drums.

Whilst growing up, John was drawn to progressive rock music and more recently become fascinated by traditional music and has blended the two styles, to make for a style all of his own.  He sparked interest in the folk world with his ambitious ‘Seasons Project’, which saw him release one song a week for a whole year.  Fourteen favourites formed songs for his ‘Songs For A Season’ album which was released in 2018.  RnR Magazine gave the album a 5 star rating.

Live, the band have gone down a storm at Festivals such as Folk East, Music Port, Beardy Festival and The Great British Folk Festival.  At the latter, the band won the audience poll for Favourite Act by an overwhelming majority.  This year they will be heading to Costa Del Folk, along with a headline tour in France.  Before that they will embark on their first headline UK Tour, including dates in London (Cecil Sharp House), Manchester, Leeds, Newcastle, Bath, Cardiff and Hull.

The Joshua Burnell Band have a big future ahead of them, don’t forget where you first saw them.  We guarantee that you will have not seen their likes before.

The same can be said of the support act, Crooked Weather from East Yorkshire.  They are Will Bladen and Holly Blackshaw and a little bit different and a perfect match for The Josh Burnell Band, with their unique blend of rock infused folk.  They are melodic and magnificent