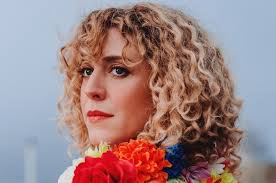 This concert was originally scheduled for the corresponding Saturday in 2021 as the last date of Lauren’s ‘Girl from The North’ Tour.  She unfortunately contracted a sore throat the day before, so had to alternative but to cancel the concert.

Now she and the band are back.  They last headlined Town Hall Live in 2017, just after Lauren released her album ‘The Beauty of This Life’, although they did appear as Chorlton Country Club in 2019

Lauren’s love of music began at an early age, with a connection to great songs, the craft of storytelling and an emotive vocal.  Her career really took off when she met her husband Tom Dibb at University.  That was ten years ago.  They have since married and have two children.

She released her debut album ‘Sweet Surrender’ in 2015.  The album’s first single ‘Ghost Town’ made the BBC Radio 2 play list, whilst the album track ‘The Waiting Game’ was picked up and played by Robert Elms of BBC Radio London.  ‘Sweet Surrender’ was followed by ‘The Beauty of this Life’ in 2017.

On the back of this album Lauren was invited to perform at the O2 Arena, London as part of Blues Fest, alongside artists such as Van Morrison and Tedeschi Trucks.  In 2019 she was invited to play at a special event in Southbank by Bob Harris, who has been a big advocate of her music.  She has also opened for the likes of Jack Savoretti, Van Morrison and Yola.

Lauren Housley is the ‘Girl from the North’ – Rotherham.  The album was released in the Spring of 2021.  It deals with love, loss, and the turbulence of growing up and learning about life.  Lauren brings a refreshing air of optimism, heart- warming hope and belief in overcoming obstacles.

Paul Sexton, music journalist and BBC Radio broadcaster sums Lauren up perfectly:  ‘What I love about Lauren, and the music she makes with her stellar band, is that she brings such pure, spontaneous soulfulness to everything she touches.  Both on record and on stage she is the real deal’

Joining Lauren on stage will be Tom on lead guitar, Mark Lewis on bass, CJ Hillman on pedal steel and Dan Wiebe on drums.  The concert will be a perfect way to end our 2022 programme.

Tickets for the concert are priced at £14 and can be purchased from Brian on 01652 649230 or brianchudley@btinternet.com, from the Londis store in Kirton, or from www.wegottickets.com.