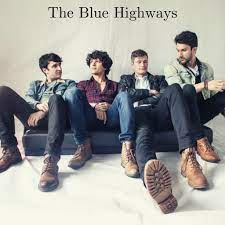 Brothers Jack, Callum and Theo Lury are the foundation of The Blue Highways, an Americana/ Alt rock band from London.

After being spotted by the likes of Bob Harris and the Americana Music Association. As the ones to watch, they have built up a reputation of being one of the best live acts on the scene and could be the next big thing.

Whilst clearly influenced by the 70’s sound of the Jersey shore, they also draw on the style of The Killers and War on Drugs to create their own unique sound.

They have already played some of the biggest Americana Festivals in Europe such as the Tonder Festival in Denmark and the American Showcase event in London.

Their debut album ‘Long Way to the Ground’ gained widespread acclaim, with Fatea Magazine stating ‘The Blue Highways’ are clearly a band with a great future.  Long Way to the Ground is a superb album that showcases their talent perfectly.’  Their second album is due out in October 2022.

Support will come from Rich Hardcastle from York, who last year brought out the wonderful Rudy’s Bar & Grill album.  He will be accompanied by Evie Rapson.

Tickets are priced at £14 and can be obtained from Londis (Kirton), from Brian on 01652 649230/ brianchudley@btinternet.com or www.wegottickets.com.