Lachlan Bryan and The Wildes

FRIDAY 15TH MAY 2020 LACHLAN BRYAN AND THE WILDES 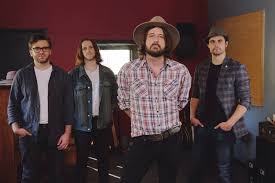 Lachlan Bryan and The Wildes from Melbourne Australia, have built their reputation on storytelling.  Over the past seven years they have released three award winning albums.  Over the last four, they have toured the UK, Europe and America building up a solid following and increasing their fan base on each occasion.  In 2018 and 2019 the band have been ‘the stars of the Festival’ at Maverick, playing sets in various line-ups.  The 2020 UK tour is eagerly awaited and we are delighted that they have chosen to play Town Hall Live.

You can pin a multitude of labels on Lachlan’s music and not be far off the mark.  So, take a pick from rock ‘n’ roll, folk, alternative country or any other contemporary roots cliché.  More importantly Lachlan writes damn good songs and delivers them with impeccable sincerity, importing a cynical wit to counter a maddening world.

On their latest album ‘Some Girls (Quite) Like Country Music, there’s a song about a cemetery, a realer trash mid-life crisis, a forty year romance, a promiscuous girlfriend, a city we like, a pre-apocalyptic cautionary tale and a missing person’s report, to name but a few.

‘Some Girls’ were preceded by ‘The Mountain’ in 2015 and ‘Black Coffee’ in 2013, which proved to be their ‘landmark’ release winning the Golden Guitar Award for Alternative Country Album of the Year.

The Wildes are Shaun Riley on bass guitar, Damian Cafarella on drums and percussion and Riley Catherall on lead guitar on lead guitar, whilst Lachlan takes lead vocals and plays guitar, keyboards and harmonica.

Support comes from Lachlan’s lead guitarist Riley Catherall, who has his own band and career back in Australia.

Advance Tickets for this concert are priced at £13.50 and can be purchased from The Costcutter store in Kirton, from Brian on 01652 649230 or btinternet.com, or from www.wegottickets.com.