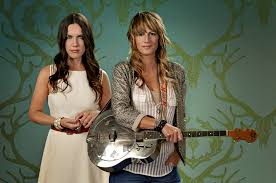 With heart-wrenching song writing and luscious harmonies combined with the natural storytelling of folk, the rhythms of Americana and catchy pop hooks, Madison Violet have been captivating audiences and critics alike for two decades.

Brenley MacEachern and Lisa MacIsaac met in Toronto in 1999, only to discover that their fathers sat next to each other in high school. That longstanding, deep-rooted history is what ties the duo’s harmonies so tight, and lies at the core of their unparalleled musical connection and enthralling live show.

After 20 years together, Juno-nominated singer-song writing duo, MADISON VIOLET, are as much wanderers as they are musicians. It is a career filled with endless roads stretching into the horizon, winding through changing landscapes, each kilometre travelled carrying with it the promise of inspiration. Perhaps that is the secret of what has made Madison Violet such an enduring band. Because with each new town, each new venue, their curiosity grows, their love of music deepens, their desire to push musical boundaries expands.

And now prior to playing the prestigious Black Deer Festival on the Saturday, they are coming to a new town, Kirton and a new venue, Town Hall Live.  We welcome them with open arms and we a sure they will enjoy their time with us and we a positive you will love them.

It is believed that the spark that ignited Madison Violet’s irrepressible curiosity came from an unlikely source; while sitting in Brenley’s grandmother’s kitchen in Cape Breton Island, Nova Scotia, filled to bursting with family, friends, instruments, and miles from their adopted home of Toronto, Ontario, two musicians looked at each over the flickering light of the old wood stove and knew that theirs would be an unconventional journey. Inspired by their heritage, emboldened by their vision, Lisa and Brenley decided that they would create a sound that would have its’ roots in their past while continually exploring new sounds.

From the beginning, the multi-instrumentalists have carried authenticity with them like a talisman, writing all of their own music and lyrics, believing that the best way to connect to their audiences was to treat them like old friends sharing a secret and a smile. As vocalists they have an innate ability to break your heart, slyly knowing that their soaring harmonies will mend it, often all in the span of one song.

The shared belief in themselves and their fearlessness to follow their dreams eventually paid off and accolades and awards soon became synonymous with Madison Violet, including a Juno nomination, a Canadian Folk Music Award for Best Vocal Group Album of the Year and a Critic’s Choice Award from Country Music People’s Magazine. Their songs have been featured in the notorious music magazine MOJO’s Top 10 Playlist, and received a mass of acclaim from outlets such as the BBC, the CBC, Maverick Magazine and NPR, and have earned the duo the Grand Prize in the Maxell John Lennon Song Writing Contest (which was voted on by a panel of distinguished artists including Elton John, Tim McGraw, Black Eyed Peas, Fergie, John Legend, Enrique Iglesias and Mary J.Blige). Madison Violet have also been on Germany’s WDR’s list of ‘Best Bands of All Time’

In early 2019, Madison Violet released their latest album “Everything’s Shifting”. The album is a heartfelt examination of how memory can splinter a heart, how loss shapes perspective and how sometimes, no matter how hard you try, you can’t have love without regret. It is an album to be listened to on the open road, with the windows rolled down: a love letter to their fans, from two wanderers who continue to follow the melodies wherever they lead.

Support will come from JESS JOCOY from Nashville.  Jess released her album ‘Such a Long Way’ in 2020 and followed it up in 2021 with her new EP ‘Brighter Eyes’.  Both received air play in the UK, gaining rave reviews.  She was the official showcase artist at the US Americana Fest in 2019 and has played the Bluebird Cafe in Nashville on several occasions.  She was invited to play on the NPR Mountain Stage programme in 2021.

Support will come from JESS JOCOY.   A Washington native, she has recorded two albums in her adopted hometown of Nashville.  Jess makes atmospheric Americana for rainy days and twilight hours.  She knows a thing or two about great stories, she has been writing them for years mixing autobiography with richly imagined fiction.

Advance Tickets for this concert are priced at £14 and can be purchased from the Londis store in Kirton, from Brian on 01652 649230 or via email at brianchudley@btinternet.com or from www.wegottickets.com