An Evening with Wilson & Wakeman 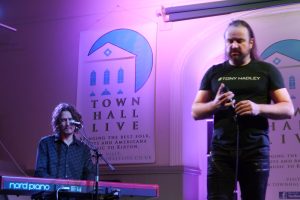 What a way to start 2020!  We welcome back Wilson & Wakeman for their third appearance at Town Hall Live.  Their two previous concerts in 2018 and 2019 have been the highlight of the year for us.  Our concert is the first date of their 2020 UK Tour and it is a privileged to have them back.

Adam Wakeman is best known as the keyboard player with Black Sabbath.  He has played with them for over 15 years and intended spending much of 2019 doing the same, but a fall for Ozzy Osbourne led to a cancellation of their world tour.  He has released nine albums with his father Rick, as well as releasing four solo albums.  He co-wrote the 2010 platinum solo album ‘Scream’ with Ozzy and has also toured with the likes of Travis, Annie Lennox and 10cc.

As a duo, Damian and Adam have released three albums, ‘Weir Keeper’s Tale’ in 2016 and ‘The Sun will Dance in its Twilight Hour’ in 2018 and ‘Stripped’ in 2019.  The latter came out in time for last year’s tour and features songs that the performed on their 2018 tour and one’s that are bound to form the basis of this tour.   As the title suggests it was recorded in the studio with just Damian and Adam playing their instruments and includes many of their own songs and choice covers such as Life on Mars (David Bowie).

Advance Tickets for this concert are priced at £14 and can be obtained from the Costcutter store in Kirton, from Brian on 01652 649230 or from www.wegottickets.com.

The 2019 concert sold out weeks before and this concert is likely to do the same, so note the date and get yours now.  The concert is sure to be another magical evening.