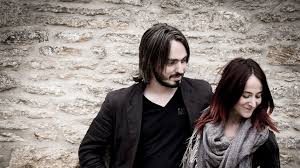 The Black Feathers are Ray Hughes and Sian Chandler.  The pair first became aware of the chemistry between them whilst collaborating in various musical projects together during 2011, becoming The Black Feathers and life partners a year later.

Soon after forming they released their debut EP ‘Strangers We Meet’ and in 2015 released their debut album ‘Soaked to the Bone’.  It met with critical acclaim across the music press and the independent music charts.  A year later they released a live album entitled ‘Live at The Convent’, which summed up their emotional and breath taking harmonies perfectly.  Since the live album they have released a box set of EP’s.

Americana, Folk and acoustic Indie Rock sensibilities co-exist comfortably in The Black Feathers musical world, with Ray’s guitar work buoying the kind of harmonies that are often only heard in family bands.  There is a sheer poetic beauty in their lyrics and a mesmeric and stunning quality to their live performances. There is also easy going, dry humour between the pair between songs that make the audience smile.

Not content with constantly touring the UK, Ray and Sian have also toured America in 2017 and 2018, playing at many showcase events.  In 2018 they spent 14 weeks in the States, playing 32 shows with 16 sell outs, at venues such as the Rockwood Music Hall in New York and The Bluebird Café in Nashville.  That is some achievement for independent musicians from the UK.

Support will come from DANNY BRADLEY who is loved by the THL audience.  Danny has charisma, holding the audience in the palm of his hand with unique versions of familiar songs, as well as songs of his own that are in turns, amusing, though provoking and foot tapping – and still the country at large have not heard of him.  He is unique and distinctive.

The Black Feathers are going places, catch them whilst you can.

Advance Tickets are priced at £13.50 and can be obtained from the Costcutter store in Kirton, from Brian on 01652 649230 or from www.wegottickets.com