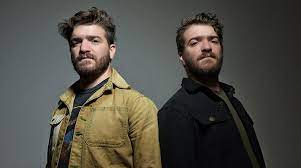 The Brother Bothers are Adam and David Moss, identical twins born and raised in Peoria, Illinois, formerly based in New York but shaped by indiscriminate rambling.  Using minimal instrumentation, heartfelt lyricism and harmonies so natural they seem to blend in one beautiful voice.  With finger picked arpeggios, a splash of keyboard and some close harmonies they evoke memories of Simon & Garfunkel, The Everly Brothers and The Beach Boys.

The Brother Brothers acoustic project emerges from several years spent travelling America both separately and together, playing in varying ensembles.  In 2018 they released their debut album ‘Some People I Know’ and followed it up in 2021 with their latest album ‘Calla Lily’

‘Calla Lily’ proves that no matter what musical context Adam and David put themselves in, what they want to say always shows the beauty in human life.  The duo’s songs are about humanity.  They address nothing topical and everything timeless – living, loving, changing, travelling, learning, yearning, discovering and dreaming.  Their songs are crafted with precision and poignancy,

Their music has earned them an international audience and enthused nods from such magazines as Billboard and Rolling Stone.  The duo have played coveted performance slots at many of America’s leading festivals.

Speaking about their live shows, Adam says ‘I feel like there is a definite living room vibe.  Most of our experience before performing together as a duo was sitting around with friends playing and creating a homey, small room environment.  We have continued that with The Brother Brothers.

Support will come from Hannah Reid, who is originally from Scotland and is now based in New York.  Hannah has been described as one of the finest singers of the day by Mojo Magazine, as can be heard on her critically acclaimed solo album ‘Way Out I’ll Wander’.  She is an artist who can’t be pinned down to one continent, one city, one project or one mode of expression.

Advanced Tickets for this concert are priced at £15 and can be purchased from the Londis store in Kirton, from Brian on 01652 649230 or brianchudley@btinternet.com or from www.wegottickets.